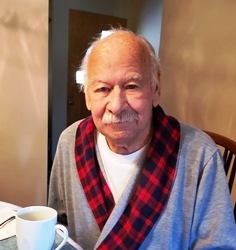 Bernard Zeisset, 79, of Highland, IL, died Thursday, April 9, 2020, at his residence surrounded by his family.

Bernard was born September 18, 1940, to Conrad and Irene (nee Wiegand) Zeisset in Trenton, Illinois. On August 3, 1974, he married Barbara White in Corning, Arkansas.

He was a member of the Highland Pistol Club and the Trenton Jaycees.

Bernard enjoyed spending time at Norfork Lake in Arkansas with his family. He loved taking his grandchildren to Branson, Missouri. He also liked taking care of his flowers and cooking—he was a phenomenal Christmas cookie baker.

He was preceded in death by his parents, Conrad and Irene Zeisset; brothers, Gerald Zeisset and Harold Zeisset.

Memorials may be made to Autism Speaks.

Interment: At a later date