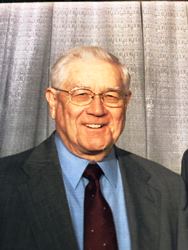 Donald Clyde, the son of John Maurice and Lena Kersch Marcoot, was born June 15, 1918 on the family farm near Pleasant Mound Township, Bond County, Illinois. Don grew up on the farms and attended the one room schools. Throughout his life he praised two of his teachers, Mary Walker at Fuller School and Eva Wernle at Union School. Don graduated from Greenville High School with the class of 1936. Between High School years he worked as a farm hand for $15.00 per month. Following High School, he worked at Brieties Café, Baldor Electric and Curtis-Wright.

Mr. Marcoot served in the United States Army Air Corp from 1942 until being honorably discharged in December 1945 as a Staff Sgt. He was a trainer and stationed at 14 different bases. Don was a P51 Crew Chief at the end of his service. After military services, he was employed by what is now Growmark, Incorporated. He worked in Charleston, Belleville and Marshall, Illinois and became District Manager in 1951.

In 1953 he joined Iowa Farm Service Corporation and served as a Senior Executive until the company merged with Growmark in 1962. Don served as an Iowa Regional Manager until his retirement on December 31, 1980.

He was a life long Methodist, having served as a lay leader and other roles in the church. He was Scout Master of Troop #46 in DeMoines, Iowa, and in the early years was a 4H leader and active in Rural Youth.

Retirement provided the opportunity for Don and Lilly to live dreams long held. He to raise cattle and she to raise Quarter Horses which they did for 25 years. They traveled much, both before and after retirement, visiting most of North America and many places in the Caribbean and Central America.

Don was a history buff and not only liked to visit historical sites, but was an avid reader of history. The Civil War, the Indian Nations and the settlement of the nation were his favorites.

He was a caring person. He was a long-time contributor to the Food Pantry and to many causes and organizations, most of them serving children. Indian children were always on his list because he felt the pain of the people.

Due to CDC recommendations, Illinois social gathering guidelines and those of the Illinois Funeral Directors Association, a private graveside funeral will be held with his family. Please leave the family a condolence thru the Donnell-Wiegand Funeral Home website www.donnellwiegand.com. Memorials may be made to St. Labre Indian School, St. Judes Research Hospital or the Bond County Food Pantry. Those memorials may be mailed to the Donnell-Wiegand Funeral Home, 203 West Oak, Greenville, Illinois.

The family would like to personally thank Dr. Siefken, Jen Bryant and their staff for their care as well as all the care givers for allowing Don to be able to live in his own home at the age of 101 and ¾ (as he would say, at this age you count the quarters).