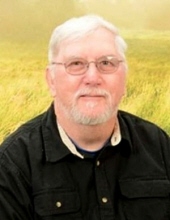 Dwight Steven Grizzard, 66, of Mulberry Grove and formerly of Granite City, Illinois went home to be with his Lord and Savior at 9:16 a.m. on Tuesday, April 14, 2020 at his home with his loving family at his side after a 16 year courageous battle with cancer.

He was born September 6, 1953 in Granite City, a son of the late Oscar and Margie (Carter) Grizzard.

Dwight had worked for U.S. Steel with many years of dedicated service as a crane operator. He was a member of Steelworkers Local #1899 and a member of the West 22nd Street Baptist Church where he and his wife took care of the nursery for several years. He had a love for the outdoors and cherished watching and feeding his variety of many species of birds including his favorite redbirds. He also enjoyed driving his tractor, clearing land and taking care of his property, always sporting camouflage on his clothing and on items throughout his home. He cherished his entire family and will be remembered for the love and special times shared with his family and friends.

He is survived by a daughter, Carrie Grizzard of Greenville; two sisters and brothers-in-law, Pat and Bob Wilkinson of Donalsonville, Georgia and Wanda and Larry Mitchell of Mulberry Grove; seven nieces and nephews, Donna, Terri, Robin, John, Joseph, Darla and Michael; many great nieces and great nephews; several great-great nieces and great-great nephews; his beloved granddogs, Sophie and Shelby; other extended family and many friends.

In addition to his beloved wife and parents, he was preceded in death by a sister and brother-in-law, Joyce and LeRoy Vest.

Dwight deserves a beautiful tribute. However, during this uncertain time, a private family service will be held at Irwin Chapel in Granite City with Reverend Keith Braddock officiating.