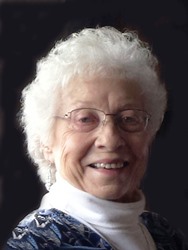 She was born November 12, 1936 in Bartelso, the daughter of the late Frank and Eleanor, nee Niehenke, Grawe.

In addition to her parents, she was preceded in death by her husband Vincent J. Albers, whom she married April 16, 1958 at St. Cecilia Catholic Church in Bartelso and who died September 14, 2013; siblings, Fr. Alvin Grawe, Frank “Lefty” Grawe and wife Marian, Mildred Loepker and husband Bernie, and Gene Grawe; father-in-law and mother-in-law, Vincent W. and Catherine, nee Winter, Albers; and brothers-in-law and sisters-in-law, Hank Kreke, Gertrude and Lawrence Becker, Adele Albers, Clarence Haake, Dolores and August Lampe, and Harry Albers.

Ethel was a homemaker and a member of St. Boniface Catholic Church and Choir in Germantown. She thoroughly loved spending time with her family, reading, listening to music, playing cards, and also shared her gift of piano and accordion playing at numerous social functions throughout her life, including polka masses.

All services will be private and a visitation and memorial mass will be announced at a later date.

Memorials may be made to St. Boniface Catholic Church or Mater Dei Catholic High School and will be received through Moss Funeral Home in Breese who is serving the family.