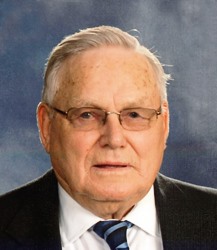 He was born March 3, 1934 in St. Rose, the son of the late Lawrence and Mary, nee Kampwerth, Buehne.

Eugene was an avid card player and loved euchre tournaments, and also enjoyed watching the St. Louis Cardinals. His greatest joy in life was his family, especially talking farming and spending time with his grandchildren and great-grandchildren.

A visitation and memorial mass will take place at St. Rose Catholic Church at a later date.

Memorials may be made to Mater Dei Catholic High School, St. Rose Catholic Church, or Hospice of Southern Illinois and will be received through Moss Funeral Home in Breese who is serving the family.