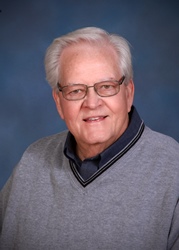 Gene served in the Air Force Reserves and previously worked at Granite City Steel. Gene retired from Super Valu Stores as a meat cutter after 37 years. In his retirement years he worked at St. Joseph’s Hospital in Breese and volunteered at Matthew 25 Food Pantry. He was an active member of the Carlyle Knights of Columbus Council 1382 where he served as the Bingo committee treasurer, Knights of Columbus 4th Degree and Carlyle American Legion, where he served as Treasurer. Gene was a member of St. Mary’s Church Catholic in Carlyle and served as a Eucharistic minister. In his free time, he would be found at the Timbercreek lodge or tinkering in his garage.

Private burial will be at St. Mary’s Cemetery in Carlyle. A Mass and Celebration of Life will take place at a later date. Expressions of sympathy in memory of Gene are suggested to St. Mary’s Catholic Church in Carlyle. Donations will be received through Zieren Funeral Home in Carlyle.