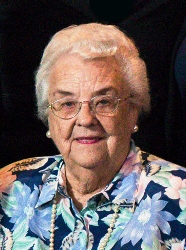 Mrs. Schmidt was born near Beckemeyer, Illinois on August 26, 1927, a daughter of Martin Christian and Olinda (Kramer) Holzhauer. She married Harry G. Schmidt in St. Louis on November 18, 1950, and he preceded her in death on January 3, 2012.

She was preceded in death by her parents and her husband; a sister – Marie Gehrs and husband Fred; a brother – Stanley Holzhauer; and a sister-in-law – Janet Holzhauer.

Dolly was a gentle and loving mother, grandmother, and great-grandmother. She was kind and helpful to those she encountered in everyday life. She was faithful and caring to her husband, Harry, until his passing. Dolly was generous in her deeds and money to those in need. She was spiritual and attended religious services until her physical disabilities would not allow it anymore. Many that may have met her would see her as a reserved person with a simple demeanor but inside was a person with a strong mind and huge heart. Dolly enjoyed cooking, baking, and Cardinals baseball. She will be greatly missed.

Private services will be held, with burial at St. John’s Cemetery in Breese. A memorial service will be held at a later date. Online condolences may be shared with the family by visiting www.ZierenFuneralHome.com.