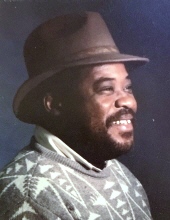 Henry D. Macon was born November 8, 1945 in East St. Louis, Illinois to the union of Willie Macon and Willie Mae Macon. Henry was the fourth oldest son of nine sons and brother to the only daughter of his family.

Henry’s family moved seven miles north of Greenville in the 1950’s. When he was a little boy about 5 years old he attended the Smithboro Grade School and Mulberry Grove Junior High School.

Henry lived in Greenville most of his life. He worked for Harold Gehrig he called him “Doc Gehrig” as a veterinary assistant for several years. After an injury in 1989, Henry went into the BBQ business a favorite pastime of his. He was the best cook around , he also liked to fish in his secret fishing places and caught a lot when he went. But nobody would beat him on his barbecue, his ribs were so tender you could pull the bone out and he had a secret recipe sauce that was second to none.

Henry retired from the restaurant business May of 1996 due to declining health after ongoing health issues. Henry took his last breath at his home with his wife and he is forever with the Lord on April 19, 2020 at 10:50 p.m. Henry had given himself to the Lord before this happened in 2015 and rededicated himself to the Lord earlier this year, so we know he is with Jesus.

He will be missed most by his wife and the running errands or when he had dialysis. Henry and Pamela were always together. They were married modestly at the Bond County Court House May 3, 1990. They were getting ready to celebrate their 30th wedding Anniversary.

Henry is survived by his wife Pamela L. (Reynolds) Macon, Pam’s son and daughter-in-law Ronnell E. and Danielle A. (Parks) Richardson, Pam’s only daughter Angela R. Richardson all of Greenville. Sister-in-law Alicia F. Crump of Greenville, Cassandra (Sandy) A. Crump of Centralia, brother-in-law Clarence A. Crump of Rollins, Wyoming, 2 grandsons and 1 great-grandson all of St. Louis. A host of nieces and nephews and cousins. While Henry was not the biological father to their children, he was better than that he was the surrogate father. He was there for them, they all called him dad.

Henry was also survived by Hannah’s children, grandchildren and great-grandchildren. For accuracy purpose names are not mentioned, but to acknowledge he had surrogate offspring.

The obituary was lovingly written by his wife. There will be no formal services at this time, due to the Covid-19 pandemic. The family encourages everyone to leave memories on Henry’s tribute page, www.donnellwiegand.com Donations can also be made online, under the crowd-funding tab to help Pam with expenses.