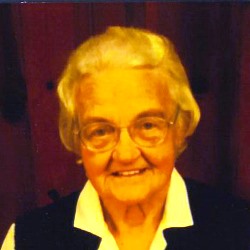 She was born April 15, 1936 in St. Rose Twp, the daughter of the late Gregory and Alvina, nee Kreke, Thole.

In addition to her parents, she was preceded in death by a sister, Marian Grawe and brother-in-law, Frank Grawe.

Surviving are a nephew and nieces, Steve (Karen) Grawe of Hoffman, Gale (Dan) Hollenkamp of Carlyle, and Tina (David) Johnson of Centralia; and several great-nephews, great-nieces, great-greatnephews, and great-great-nieces.

JoAnn formerly worked as an administrative assistant for Union Pacific Railroad and was a member of St. Dominic Catholic Church in Breese. She enjoyed traveling (bus trips), painting, making crafts, but most of all being outdoors and working in her yard.

A Memorial Mass will be announced and held at a later date.

Memorials may be made to Clinton County Senior Services or the Alzheimer’s Association and will be received through Moss Funeral Home in Breese who is serving the family.