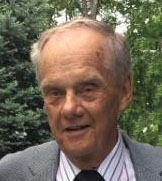 Ted retired from McDonnell Douglas (Boeing) after 41 years of service. He was a member of St. Augustine Church and Men’s Sodality and the Breese Knights of Columbus. He treasured time with family, especially his grandchildren, and also enjoyed golfing, playing cards, and watching the St. Louis Cardinals.

Private Service will be held, and a memorial mass will be announced at a later date.

Memorials may be made to St. Augustine Church, Mater Dei Catholic High School, or Lights for Scholarships (St. Joseph’s Auxiliary) and will be received through Moss Funeral Home in Breese who is serving the family.