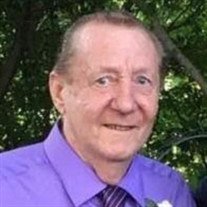 He was born on September 26, 1946, in Saint Jacob, IL, the son of Charles and Frances (nee Schneider) Moore.

Wayne was born in St. Jacob, IL and graduated Triad High School in 1965. He worked at a gas station then joined the US Army with duty in Vietnam. After his service he lived in Louisiana and ran a dump truck business. He moved back to IL and worked for Allied Chemical, then AO Smith, witch changed to Tower Automotive, as a Millwright for the automotive industry. He retired in 2007 and he and his son Travis operated a land excavating business. Wayne was very active with the VFW, holding State and District Chairs, and Past Commander. He was also involved with VFW Youth Programs. He assisted the Pocahontas American Legion with their activities. He loved being outside, loved his motorcycles, and spending time with his family and grandchildren.

Private graveside services and interment will be at Keystone Cemetery in Saint Jacob, IL, with Father Pat Jakel officiating.