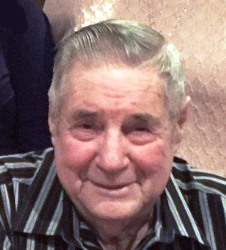 He was born January 6, 1932 in St. Rose, the son of the late Gertrude, nee Huelsmann, and Aloysius H. Eversgerd, Sr.

In addition to his parents and step-mother, Nelda Hanks, he was preceded in death by his first wife Evelyn “Red”, nee Korte, Eversgerd, whom he married May 30, 1956 at St. Boniface Catholic Church in Germantown and who died April 24, 1986; grandsons, Adam Nettles and Tyler Rickhoff; brother, David Eversgerd; step-son-in-law, Tim Gruenenfelder; and brothers-in-law and sister-in-law, Don Lippert, Wanita Eversgerd, Cyril Korte, and Lavern Korte.

Al was a veteran of the United States Air Force and retired from the Aviation Systems Command for the Department of Defense. He was a member of St. Boniface Catholic Church and the Germantown American Legion Post 325, where he was a past commander and member of the drill team. “Jr.” enjoyed fishing, camping, and gardening.

All services will be private and a Memorial Mass will be celebrated at a later date. Memorials may be made to St. Boniface Cemetery or Germantown American Legion Post 325 and will be received through Moss Funeral Home, 535 N. 5th, Breese, IL who is serving the family.