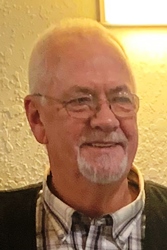 David E Joiner, age 66, of Greenville, IL passed away Thursday, May 7, 2020 at his home. All services will be private. Memorial contributions are suggested to the family and can be sent to Young Funeral Home.

He was preceded in death by his father, and three brothers Thomas Joiner, Kenneth Joiner, and Ronald Joiner.