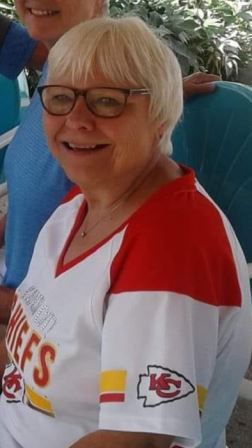 Dellane A. Burke, age 69, of Greenville, IL passed away Thursday, April 30, 2020 at her home. A Celebration of Life will be held at a later date. Memorial contributions are suggested to Bond County Hospice or the American Diabetes Association.

Dellane was born January 19, 1951 in Atchison, KS to Delbert Raymond and Mary Ann (Graves) Brewer. She married Terry Burke on May 23, 1981 in Greenville, IL. She is survived by her husband Terry Burke of Greenville, her son Daniel (Tammy) Forsberg of Greenville, IL, her mother Mary Ann Brewer of Atchison, KS, her mother-in-law Maxine Burke of Greenville, IL, three grandchildren Daniel Joel Forsberg, Joshua Forsberg, and Ashley Forsberg. She is also survived by two sisters Juanita (Ken) Gregoire of Atchison, KS and Kathy (Mike) Schelp of Kansas City, MO along with her brother Tom Brewer of Seguin, TX. She was preceded in death by her father, a brother Ervin Brewer, and one sister, Susan, in infancy.

She grew up in Cummings, KS and attended two years at Emporia State College, Emporia, KS. She then attended Stormont Vail Nursing College in Topeka, KS. She worked as a registered nurse for about six years at Atchison Hospital, in Atchison, KS. She then worked from 1981 to 2016 at Anderson Hospital in Maryville, IL. She was a member of the Greenville First Christian Church and the Greenville Country Club.

Dellane was a passionate fan of the Chicago Cubs, The KC Royals, and the KC Chiefs. She loved music, especially the Beatles. She enjoyed sharing wine and company with friends and family.