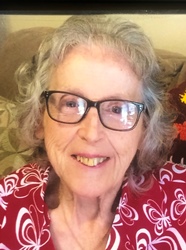 Graveside ceremony will be at 2:00 PM, Friday, May 22, 2020, at Montrose Cemetery, Greenville, IL, with Reverend Tom Ryan officiating. Donnell Wiegand Funeral Home has been entrusted with arrangements.

Memorials will be directed to The Simple Room, Greenville, IL

Janet Mae Hitchcock was born February 12, 1932 in Dover, NJ, the third of five children to Leonard Arthur and Dorothy Catherine (Magill) Hitchcock. She attended the local schools, and graduated from Demarest High School, Hoboken, NJ. Her fondest memories of growing up were of being with Grandma and Grandpa Magill.

Janet and Harry C. Behnke were united in marriage on June 24, 1949. They enjoyed 58 years of marriage before his passing on August 1, 2007. They were married at the Little Church Around The Corner in New York City, and lived in New Jersey until they relocated to Greenville, IL in 1987. Janet and Harry raised one daughter, Brenda Sanders.

Janet knew from a young age that she wanted to be a secretary, and having earned many academic honors and awards for shorthand, typing, and bookkeeping in high school, Janet became an Executive Secretary at McGraw-Hill Publishing Company, in New York City, and later at Stevens Institute of Technology in Hoboken, NJ. After having watched the Twin Towers being built from her New Jersey home, she worked in the World Trade Center for Seapac Services, Inc, as an Assistant Personnel Manager. She never forgot shorthand, often using it for her grocery lists later in life.

Janet was also a dedicated Christian, and a teacher of the Word of God for more than 60 years, having taught in both New Jersey and Illinois. She earned a teaching certificate from the Evangelical Teacher Training Association, the Bible Club Movement, Inc., and Child Evangelism Fellowship, Inc. She received honors certificates from both Prairie and Moody Bible Institute Extension Schools. In her life, she taught VBS, Bible Club, and Women’s Studies. She held many church offices and titles, including VBS, Bible Club, and Program Director, Teacher, Deaconess, Clerk, Librarian, and Financial Secretary. She was privileged to serve as a Counselor and choir member at the 1957 Billy Graham New York Crusades. Janet was also privileged to serve for almost 20 years as Program Director of The Edith Christian Group at Fair Oaks Nursing Home in Greenville, IL.

In addition, Janet was a Notary Public for the State of New Jersey, a member of the Greenville Hospital Auxiliary, and the Utlaut Memorial Foundation. Janet was affiliated with the First Baptist Church and Free Methodist Church, both in Greenville, IL. Janet also did some volunteer work for The Simple Room in Greenville, IL.

Janet is survived by daughter, Brenda Sanders Of Rockton, IL; sister, Anne (Hitchcock) Obergfell and special niece, Sue (Omar) Yigiter of Brick, NJ; special friends Ken, Jennifer, Kendall and Quinn Mesnard of Greenville, IL. Janet cherished all of her friends from New Jersey to Illinois, and all points in between.

So many knew Janet, as she walked everywhere, making friends along the way, until she was no longer able to do so, due to age and dementia. She spent the last two years of her life at Cedarhurst Senior Living, being cared for and loved by their dedicated staff.