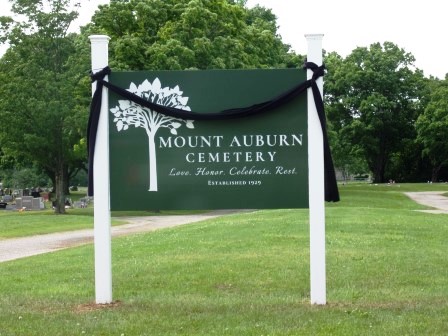 This past weekend, was the first Memorial Day weekend since the public Mt. Auburn Cemetery Association was formed to operate the cemetery.

Larry Snow, one of the association organizers, said many people visited the cemetery and made positive comments about how the cemetery looked.

Association members were at the entrance to the cemetery throughout the weekend, accepting donations. All money collected and future donations go back into the cemetery, according to Snow.

Last Friday morning, a large contingent of volunteers gathered to mow and trim the grass.

Also on Friday, a new cemetery sign was erected. Overseeing that project was Lincoln Siebert, secretary of the association.

Like the community, members of the cemetery association are shocked and saddened by the passing of Lincoln early Sunday morning in a traffic accident.

Lincoln volunteered many hours to the cemetery and Snow said he was instrumental in the sign project.

The association has placed black ribbon on the sign as a tribute to Lincoln.

The cemetery officially came under the operation of the new public association on April 1. Snow said everyone is looking at it as a community-owned cemetery.

He added the association is now ready to begin selling grave sites.

The next project is repairs to the cemetery roads and Snow said a decision has to be made what to do with a building on the west end of the property.