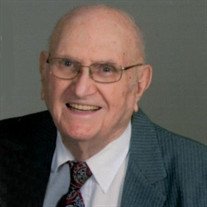 He was born and raised in rural Pocahontas on the family farm and graduated from St. Paul High School in 1947. He grew up working on the family farm, later on he worked for his brother in-law at the saw mill and then he served in the US Army with duty in Korea during the war from 3/1951 to 3/1953. After returning home he married Olivia and they moved to Highland. He worked 37 years at Community Lumber Co, Highland and later worked 20 years at Rural King, Highland and retired at the age of 82 years old. He was very active in many capacities with the Knights of Columbus, to highlight a few: Chairman of the Hall Building Committee; Council Treasurer for 37 years; ran Bingo since its inception in 1977; President of the Columbus Club; he received the Illinois Knights of Columbus “Hall of Fame”. Many of the hours he spent there, his wife was by his side. He received a Paul Harris Fellow from the Highland Rotary Club and was a Past Commander of the VFW Post 5694, Highland, IL.

Private Funeral Arrangements are being handled by Spengel-Boulanger Funeral Home in Highland, IL.

Memorial contributions may be made to Alzheimer’s Association or St. Paul School Educational Foundation.