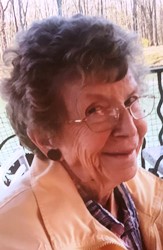 There will be no formal services at this time. Interment will be in Mt. Auburn Cemetery. Memorials may be made to the Bond County Humane Society or donor’s choice. Please mail your memorials to the Donnell – Wiegand Funeral Home, 203 West Oak Street, Greenville, Illinois 62246.

Rosemary, the daughter of LeRoy and Alma Goessling Knoeppel, was born February 28, 1927 in Keokuk, Iowa. Rosemary grew up in Hamilton, Illinois and attended the local schools. She graduated from Hamilton High School and continued her education at Carthage College in Carthage, Illinois. She received her business degree from Carthage.

Rosemary and Duane Ragland were married in 1947. They had two daughters who both survive: Mary Ann (John) Prater of Greenville, Illinois and Patricia May (Robbie Carter) of Florida. Duane preceded Rosemary in death.

December 19, 1976 Rosemary and Foy Meyer were united in marriage. He passed away May 6, 1983. She worked at the Greenville High School in the Guidance Office and later for Greenville College assisting at the Library. Rosemary was a volunteer for many years at the Thrift Store. She loved to read in her free time and traveled all over with Foy. Her greatest love was family, hers and Foy’s families, especially all the grand and great-grandchildren. Rosemary also enjoyed spending time with her friends at “Coffee Club” at McDonald’s and other places.

Rosemary was preceded in death by her parents, husbands and a very special granddaughter Mindi Prater.

Condolences to the family may be made online. www.donnellwiegand.com.