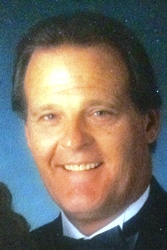 Tim was born April 6, 1947 in Highland, IL to Nelson E. “Sam” and Betty (Julian) Duft. He married Diane Lowe on March 13, 1968 in Vandalia, IL. He is survived by his wife Diane Duft of Greenville, IL, his daughters, Lisa Duft of Oro Valley, AZ, and Emily (Rick) Doering of Lisle, IL, and his son, Bradley Timothy Duft of Mulberry Grove, IL. Surviving is his sister Melissa (Jim) Francis of Traverse City, MI along with two grandchildren, Nathan and Allison Doering. He was preceded in death by his parents and a brother Michael J. Duft.

He grew up in Greenville and graduated from Greenville High School. He worked throughout the United States installing microwave towers for AT&T, then after his marriage he became a salesman for N.O. Nelson Company, a plumbing supply company in Alton, IL. He then went to work for Coates Steel Product Company, Inc. in Greenville and eventually retired as company President.

For his enjoyment, Tim was a member of the Greenville Masonic Lodge 145 AF & AM for 49 years. Last year he was honored by the Lodge and received the Lodge Builder Award. Tim was an active participant for 48 years in the Provost Guard of the Ainad Shrine Temple in East St. Louis, IL. He was also a member of The Greenville First Presbyterian Church. Tim was also pivotal in establishing the Greenville Humane Society He was an avid worker in his yard and on his cars. Tim loved watching his children’s and grandchildren’s sports and activities. And Tim loved his animals through the years.

Services will be held at a later date. Memorial contributions are suggested to Shriner’s Hospital for Children or The Bond County Humane Society.

Online condolences can be made at www.youngfh.net.