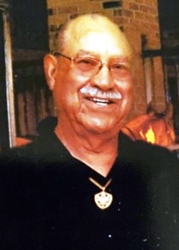 Clayton served in the Air Force from 1953 to 1962 as a survival instructor to pilots on B-52 bombers. Clayton began working part time for the Clinton County Sheriff’s Department after his service in the U.S. Air Force. He also worked for the Carlyle school district part time as a janitor and bus driver. He joined the Carlyle Police Department in July of 1975 as their juvenile officer and in 1994 Mayor Don Schmitt appointed Clayton Chief of Police of the Carlyle Police Department. He retired from that position in December of 1999, after close to 30 years in law enforcement. During that time Clayton also worked for the United States Marshals Service. Clayton, along with his wife Lillian, were founding members of the Holy Garden of Prayer Church in Carlyle.

In addition to his wife Alice and his wife Lillian, he was preceded in death by his parents, a daughter, Lucritia Macon and 2 grandchildren, Sondra Mitchell and Josh Macon.

There will be a private visitation for his family at Zieren Funeral Home followed by a procession to the cemetery. Graveside services for Mr. Mitchell will be Saturday June 6th, at 12:00 at Carlyle Cemetery. All in attendance are asked to wear a facemask and follow social distancing recommendations. Services will be officiated by his grandson, Rev. Ted Macon of Holy Garden of Prayer Church in Carlyle. The service will be livestreamed and can be viewed remotely by visiting https://my.gather.app/remember/clayton-mitchell-jr-. Please visit the link at the time of the service.

In lieu of gifts the family would ask that memorials be made to the Holy Garden of Prayer Church and will be received through Zieren Funeral Home, PO Box 276, Carlyle, Illinois 62231. Online condolences may be shared with the family by visiting www.ZierenFuneralHome.com.