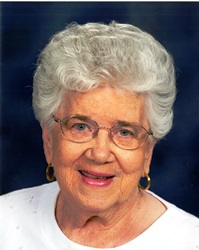 She was born September 2, 1930 in Breese, a daughter of the late John F. and Bertha T., nee Goewert, Schulte.

In addition to her parents, she was preceded in death by her husband Charles F. “Charlie” Cintalon, whom she married June 3, 1952 at St. Dominic Catholic Church in Breese and who died September 21, 1993; a son, William John “Bill” Cintalon on August 4, 1969; and a brother-in-law, Lou LeBlanc.

Dolores formerly worked many day jobs at numerous local establishments in Breese. She was a member of St. Dominic Catholic Church, and a former member of St. Joseph’s Hospital Auxiliary and the Breese Library Board. Dolores enjoyed bowling, playing cards and bingo, traveling, and spending time with her daughter, grandchildren and great-grandchildren.

In lieu of flowers, plants, and other gifts, memorials may be made to the wishes of the family and will be received at church or through Moss Funeral Home in Breese who is serving the family.

Expressions of sympathy can be sent to the family at www.mossfuneralhome.com,