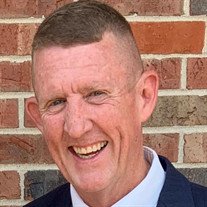 He was born on Sunday, September 24, 1961, in Jacksonville, FL, the son of Donald and Linda (nee Garris) Hackle.

Born at Jacksonville, FL; grew up in the Macon, GA area and graduated from Central High School, Macon, GA. He graduated from the University of North Georgia, Dahlonega, GA, in 1983, (BA in History) and was the commander of the Blue Ridge Rifles (college drill team), and a member of the Pi Kappa Phi fraternity and the Scabbard & Blade military fraternity. He later received a Master Degree in Political Science from Troy State University, AL.

In 1983 he served active duty with the US Army, he was a graduate of, Infantry Basic Officer Leader Course, Ft. Benning, GA and Army Aviation School, Ft. Rucker, GA. He was active service in Desert Storm with the 2nd Armored Cavalry Regiment; later Battalion Commander at Ft. Knox, KY and retired after 22 years as a Lt Col.

He worked at Ft. Leavenworth, KS and later at Scott Air Force Base, IL, as an analyst. He enjoyed reading, blogging, Batman, baseball, running marathons, and being engaged in politics.

Private Visitation and Funeral Service will be at Spengel-Boulanger Funeral Home in Highland, IL.