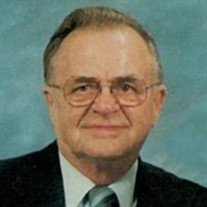 He was born on Friday, September 13, 1929, in East Prussia, Germany, the son of Albert and Margarete (nee Czemper) Lawrenz.

On Saturday, October 30, 1954, he married Inge Sigunde Lawrenz nee Driesner at Aurich, Germany, who passed away on Saturday, November 06, 2004.

He was a member of First Baptist Church, Highland, IL.

Karl was born in Friedrichshuld, County of Rummelsburg, State Pomerania, Germany. He grow up in Germany, during WWII. December 16, 1959, he and his family arrived at Highland, IL, sponsored by the First Baptist Church, Highland, IL. He began working at Balser Electric, Highland, March 7, 1960 and retired in 1994 as a shop foreman, plus taught quality control in the U.S. and Mexico. He was a greeter for many years at the Highland Wal-Mart. He and his wife enjoyed travelling and many trips to Germany to visit family.

Memorial contributions may be made to First Baptist Church or Meals On Wheels.