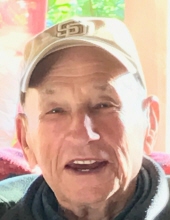 Walter Frank, the son of Frank and Mary Bowdre Paine, was born March 5, 1931 in Greenville. Walter grew up in Bond County, attended the local schools and Greenville High School.

Frank had a full & interesting life. He, as many of his generation did, knew the value of hard work. He started working with his father at Doc Floyd Orchard in Greenville. After graduation from high school, he was involved in the construction of an additional building at A.E. Staley Mfg. Co in Decatur, IL. As a young man he decided that military service would be a good choice for his life & he enlisted in the Navy. Shortly after, he married Maggie Simmons & they lived the Navy life. As a family, they lived in Jacksonville, FL, Patuxent River, MD, Albuquerque, NM, Argentia,Newfoundland in Canada, Corpus Christi, TX, and Millington, TN. He was also stationed on the USS Independence in the Mediterranean Sea, Reykjavik, Iceland and Norfork, VA.

He retired to Mulberry Grove after 20 years in the Navy. He worked another 20 years as lot supervisor for Midwest Commodities, Mulberry Grove,IL. He & Maggie would travel & spend some time in Arizona during the winter months until her death. In his later years, he would spend his winters in Alpine, CA with Connie Koontz.

He enjoyed golfing and model trains. His biggest legacy is his family.

Walter and Margaret “Maggie” Ellen Simmons were united in marriage on December 10, 1950. They enjoyed 46 years together before her passing on March 19, 1997. They are the parents of Ronald (Joni) Paine of Litchfield, IL, James Paine who preceded in death, Walter “Wally” Paine, Jr. who also preceded in death, Robert (Joyce) Paine of Woodriver, IL and Autry (Allen) Dotson of Sedalia, MO. He is also survived by his significant other, Connie Koontz of 22 years and her sons, Scott (Lisa) Gosnell of Alpine, CA and Corey (Kim) Gosnell of Lansing, MI.

Walter was the last of his generation, preceded in death by his siblings: Zane Paine, Don Paine, Lynn Paine, Bill Paine and Lucy Merritt.