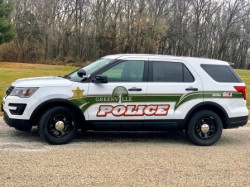 During June, the Greenville Police Department made one misdemeanor arrest and took three people into custody on warrants. Officers issued traffic tickets to 12 motorists.

The department responded to five requests for vehicle unlocks, and assisted seven other motorists. Officers responded to eight burglar alarms.

The lake officer patrolled Governor Bond Lake 121 hours last month. He estimated there were a total of 318 lake users. The officer made 48 public contacts and issued eight verbal warnings.