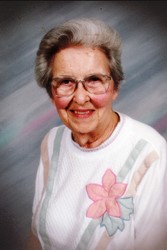 A Tanglewood Community centenarian, Mrs. Irene Frank, passed peacefully with her family at her bedside. Mrs. Frank died at 1:53 p.m. Friday afternoon January 10, 2020 at the Riverview Regional Medical Center in Carthage where she was admitted December 4th suffering from a hip injury. Mrs. Frank was age 102

They were preceded in death by a granddaughter, Amy Elizabeth Moran who was born December 5, 1984 and died August 2, 1989 at the age of 4 following a thirty month battle with cancer and by their youngest daughter, Linda Frank who died March 7, 2015 at the age of 62 in Blair, Nebraska.

Mrs. Frank was a 1935 graduate of the Mulberry Grove Senior High School and attended Greenville University in Greenville, Illinois.

She was of the Methodist faith and was a retired insurance company secretary.

Condolences to the family may be made online, www.donnellwiegand.com.