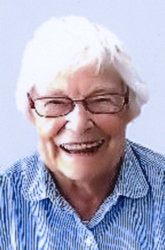 Marilyn J. Jackson, age 94, of Greenville passed away Sunday, July 19, 2020 at Greenville Nursing and Rehab. A celebration of life will be held later. Memorials can be made to the First United Methodist Church, HSHS Holy Family Hospital Auxiliary or the donors choice.

Marilyn was born November 21, 1925 to George H. and Mary L. (Wood) Daugherty at Blessing Hospital in Quincy, Illinois. She grew up on the family farm and attended a one room school for grade school and Mendon High School, graduating in 1943. After high school graduation, she worked for a few years, then entered nursing school. After an illness she changed her vocation to medical technologist. During her training she met an admiring patient, whom she later married Delbert E. Jackson on May 7, 1950 in Mendon, Illinois. He preceded her in death on August 13, 1980.

She completed her Bachelor of Arts at Greenville College in 1976. She worked as a registered medical technologist at St. Joseph's Hospital for 24 years, retiring in 1994. After her retirement she travelled on various Elderhostel and Bradford Bank Travel Club trips, including the Lewis and Clark Trail, Hawaii, San Juan Islands in Washington state, New York City before the Twin Towers were attacked, and the 1984 World's Fair in New Orleans. She also became interested in genealogy, tracing family back to Ireland and England. She enjoyed volunteering at the Hospital Auxiliary Thrift Store for many years. She was a member of the First United Methodist Church in Greenville and Benjamin Mills Chapter of the Daughters of the American Revolution.