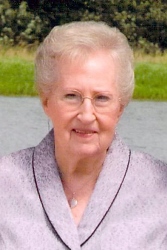 Mrs. Beckemeyer was born in Bond County, Illinois on March 19, 1928, a daughter of William and Clara (Schubert) Hediger. She married Alvin A. Beckemeyer on April 20, 1954, at Immanuel United Church of Christ in Carlyle. He preceded her in death on October 20, 2008.

Mrs. Beckemeyer was a member of Immanuel United Church of Christ. She and Alvin volunteered in many roles at the church. In their younger years, they enjoyed dancing with friends and traveling.

All services will be private, and Mrs. Beckemeyer will be laid to rest at Carlyle Township Cemetery. In lieu of other gifts, the family suggests donations in Ruby’s memory to Immanuel United Church of Christ in Carlyle or to the American Heart Association.