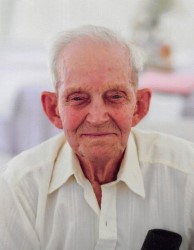 Mr. Fuller was born on January 21, 1929, in Coffeen, IL, to the late Dan Warren & Geneva Helen (Webb) Fuller. He was a 1946 graduate of Coffeen High School in Coffeen, IL. Mr. Fuller married Nancy M. Kimbro, on December 4, 1949, in Hillsboro, IL. She preceded him in death on June 27, 1998. He was a lifelong farmer and had lived in Coffeen, IL his entire live. Mr. Fuller was a member of the National Farmer’s Organization; Lifelong member of East Fork Baptist Church, where he had served as Deacon; East Fork Township Supervisor for 14 years and also served as a Trustee; Coffeen Community Library, where he was a past president and held Coffeen Coffee Club and he was founder & a lifelong member of Rocky Ford Park, Inc. in Coffeen, IL