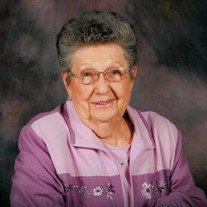 She was born on Saturday, March 26, 1927, in Pocahontas, IL, the daughter of Samuel and Lillie (nee Gantner) Iberg.

She was a member of Evangelical United Church of Christ, Highland, IL, former member of the Madison County Farm Bureau and Weinheimer Square Dancing Club.

She was born and raised on a farm south of Pocahontas, in Bond County, IL. After marriage they farmed close to where she grew up. After her husband’s death she continued farming with her father’s help. In 1964 she and Rich purchased a farm north of Grantfork. She and Rich farmed and she was a school bus driver. They farmed up until their retirement and they moved to Highland. Her passion was farming. She enjoyed playing cards, making wedding cakes, bowling, traveling, trips with friends, golfing, Saturday evening dancing, square dancing at the Weinheimer and Family visits.

Memorial contributions may be made to Evangelical United Church of Christ, Leaps of Love or donor’s choice.