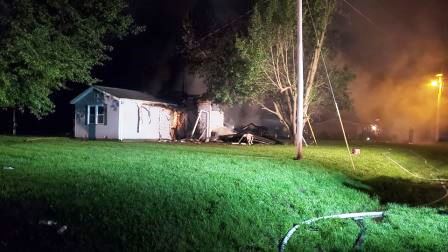 A house was destroyed by fire Sunday night, along Walcott Road in Clinton County, southwest of Keyesport.

Keyesport Fire Protection District Chief Jim Golder told WGEL, when he arrived at the scene, the two-story house was engulfed in flames and there was nothing firefighters could do to save it. The fire chief reported the home was being remodeled and no one was living in the residence.

There was no one at the house when the fire broke out. Neighbors noticed it and called for firemen at 9:49 p.m.

Chief Golder said it took a lot of water to put out the fire, and a track hoe was eventually brought in to move debris from the basement area so firefighters could make sure the flames was out.

Assisting the Keyesport Department were firefighters from the Mulberry Grove, Smithboro and Wheatfield districts.

MedStar EMS was also dispatched to the scene, as firemen battled the fire on a hot night.

Chief Golder said the cause of the fire has not been determined, but is still being looked at.

Keyesport firemen were at the scene until about 1:50 a.m. Monday.