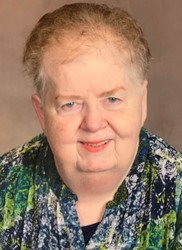 Joan Ellen Odneal, age 78, passed away Wednesday, August 26, 2020 in St. Elizabeth’s Hospital, O’Fallon, Illinois with her two children by her side.

Joan and John “Jack” Dean Odneal were united in marriage on April 20, 1963 in Chicago. They met when Jack was in boot camp at Great Lakes Naval Base in North Chicago. They were then stationed at Charleston, South Carolina, then Chelsea, Massachusetts where their daughter was born, and finally back to Great Lakes where their son was born.

Just before her marriage, Joan worked at the William Wrigley, Jr. Company of Chicago as a secretary in the exporting department. After her children were both in school, she worked for 26 years at Luxor Corporation in Waukegan, Illinois, starting in customer service, then on to order processing, billing, purchasing, and finally as computer administrator. After moving to Greenville, Illinois, she worked for Nance’s Antiques in Pocahontas, Illinois until her retirement in 2005.