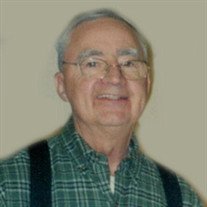 John was born to Ira Orie and Mamie Lee Barker on May 3, 1933 in Benhams, VA. John grew up in a large family comprised of 5 brothers and 2 sisters. The Barker family grew up in rural Bristol VA in the foothills of the Appalachian Mountains. He joined the Navy in 1952 at the age of 18 and served in active duty until 1956. On May 10, 1953 dad married our mother, Elizabeth Minnie Sproles. They were married until September 5, 2000, when our mother passed away. They were married for 47 years and raised 6 children. After John was honorably discharged from the Navy he moved with mom to Richmond IN where he began working in various factories in the area. In about 1967/1968 he became involved with the Pentecostal religion. He was very passionate about belief in God and earned an opportunity to become an ordained minister in the local church in Richmond IN. He also played the guitar and sang in church services and events. Eventually he purchased a small rural house with a small amount of acreage in New Paris OH. Around 1982 Dean, who had started to manage a feed premix plant in Highland IL offered dad the opportunity to relocate and work in the plant operation. Dad, mom and James moved to Pierron IL where he resided until shortly after mom’s death in 2000. Dad retired from DuCoa in 1997 in Highland IL. A few years after retirement mom started to encounter various health issues and required some significant surgery and later, dialysis for kidney treatment. Dad took care of mom up till her death in 2000. Within a year after mom’s death dad decided to sell his home in Pierron and move to Highland where he resided in a senior’s apartment complex until his death. Over the years he became well known at bingo nights that were conducted by the Knights of Columbus on Wednesdays and VFW on Thursdays. He was known for his promptness (always got there early) and always hustled out the door at the end of bingo. Francis passed away in May 2019 and dad began slowing withdrawing from bingo and being active. His health started to decline starting around April 2020. His family spent time with him during a hospice period that lasted around 5 weeks. During this time, he remained mentally alert and aware of the situation and prayed frequently for God to end his suffering. He passed peacefully on August 7, 2020.In closing, John D. Barker lived a long, eventful life and is left with a legacy of family and friends who will always remember his passion for political discussions and strong religious beliefs. He left his sons with a strong work ethic and responsibility to take care of family and not rely on others during challenging times.

Funeral Service will be at 11:00 AM on Wednesday, August 12, 2020, at Spengel-Boulanger Funeral Home in Highland, IL, with Rev. Mary Ann Lawrence officiating.

Memorial contributions may be made to Vitas Hospice.