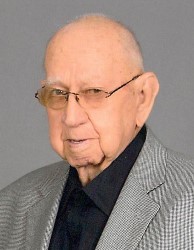 Mr. Robert was born on August 27, 1928, in Carlyle, a son of Ronan and Sevilla (nee Kleber) Robert. He married Mary Lou Erlinger and she survives in Carlyle.

He was preceded in death by his parents – Ronan and Sevilla Robert; a granddaughter – Brooke Robert; and his siblings and in-laws – Earl “Buster” Robert, Betty and Willard Weiss, William “Bill” Robert, and Phillip Robert and wife Ellen.

Mr. Robert was an avid outdoorsman who loved gardening, hunting, and fishing. He could often be found reeling in crappie from his boat dock. John also enjoyed training and racing horses across the country. John was a veteran of the Korean War and a lifetime member of the V.F.W. Post 3523 in Carlyle and American Legion, Post 404, also in Carlyle. He retired from work at the Clinton County Highway Department.

A Funeral service will be held at 1:00 PM on Monday, August 24, 2020, at Zieren Funeral Home in Carlyle with Fr. George Mauck, officiating. Interment will follow at St. Mary’s Cemetery. Visitation will be held at Zieren Funeral Home on Monday from 9:00 A.M. – 1:00 P.M. Please wear a facemask if you can, follow social distance recommendations, and refrain from handshakes and hugs.

Expressions of sympathy in memory of Mr. Robert are suggested to the Jared Burke Foundation and will be received through Zieren Funeral Home, PO Box 276, Carlyle, IL 62231. Online condolences may be shared with the family by visiting www.ZierenFuneralHome.com.