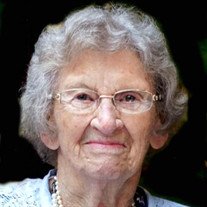 She was born on November 22, 1927, in Grantfork, IL, the daughter of Charles and Milda (nee Steiner) Casper.

She was a member of Evangelical United Church of Christ.

Laurene was born at home in Grantfork, IL. She graduated Highland High School in 1945. She worked as a secretary at CJ Hug Company. After her marriage, she and her husband, John, moved to Elmhurst, IL while John attended Elmhurst College. After his graduation they moved to Webster Grove, MO while John attended Eden Seminary. While there she worked as a secretary at Webster Grove Schools and as a Teachers Aid. After her husband graduated, they served many churches in Iowa, Chicago, Mascoutah, and North Aurora. Laurene kept busy raising their 5 children. She was active in the churches they served, being part of the Women’s Guild at those churches. In 1970 she earned a Teaching Certificate from Belleville Junior College and she worked as a Substitute Teacher. She and her husband were involved with United Marriage Encounter and traveled extensively attending meetings and interacting with couples for marriage counseling. After retirement from ministry, they moved to rural Carlyle, IL and entertained their children and families for 13 years. Then they moved to Highland and enjoyed being with their ancestral families and friends. One of Laurene’s past times was quilting and knitting.

Private funeral service will be at Evangelical United Church of Christ in Highland, IL, with Rev. Eric Quinney-Burnard officiating.

Memorial contributions may be made to Evangelical United Church of Christ in Highland or Union Congregational Church in North Aurora, IL.