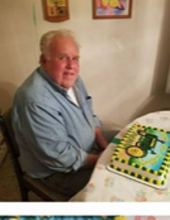 Funeral services will be held 3:00 p.m. Friday, August 7, 2020 at the Donnell – Wiegand Funeral Home with Rev. Dr. Ward Sussenbach officiating. Interment will follow in Mt. Gilead Cemetery with Military Honors. Visitation will be held from 2:00 p.m. until service time at the Donnell – Wiegand Funeral Home in Greenville. For those who desire memorials may be made to the Mt. Gilead Cemetery.

Marion H. Miller, the son of Lucinda Ann Parker Miller and Harry H. Miller, was born on November 7, 1927 in Nameoki township near Granite City. IL.The family moved to the farm West of Greenville in 1929 and Marion grew up there on the farm. He attended Sinai one room school and Greeenville High School.

Marion answered his country’s call by joining the United States Army on February 6, 1946 becoming a corporal and served as radio repairman serving in Newfoundland from November 1946 until March of 1947. He was honorably discharged on May 2, 1947 at Westover Field, Mass. Marion returned home and farmed with his father. Marion then became a mechanic working for Anthony Farm Implement, Flamm Farm Implement, and for Helmkamp Farm Supply becoming one of the best John Deere mechanic in Southern Illinois. Marion enjoyed being with his friends, farm auctions, the Pinkneyville Steam Engine Show, was an excellent listener with his friends, and was an avid reader. Marion farmed his own farm at the age of 91 up until this year.

Marion is preceded in death by his parents and Sara’s twin sister Mara Jean Miller age 31 days who died on March 31, 1935.