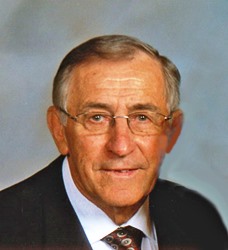 Mr. Frerker was born July 1, 1935 in Breese, the son of the late Leo and Cecilia, nee Thoele, Frerker.

In addition to his parents, he was preceded in death by siblings, Delores Schulte, Dorothy Frerker, and Leo Frerker; father-in-law and mother-in-law, John and Alma Reilman; and brothers-in-law, Lawrence Schulte and Ardell Reilman.

Frank was a veteran of the United States Army and was a lifelong grain and dairy farmer. He was a member of St. Boniface Catholic Church in Germantown where he previously served on the parish council and as a trustee, past member and chairman of MidAmerica Dairy Association, past board member of the Germantown Fire Department, and past board of directors of Germantown Trust and Savings Bank.

In lieu of flowers, plants, and other gifts, memorials may be made in the form of masses at St. Boniface Catholic Church in Germantown and will be received through Moss Funeral Home in Germantown who is serving the family.