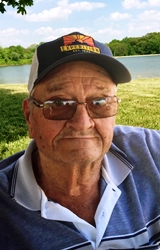 Herman Joseph Huelsmann, age 85, of Dubois, IL, formerly of Aviston passed away on Friday, August 28, 2020 at his home surrounded by his loving family. He was born in Albers, IL on April 3, 1935, the son of Cyril and Anna (Heimann) Huelsmann. He married Mary Detmer on October 17, 1956 and she survives in DuBois.

Herman was a member of St. Francis Parish in Aviston, an Honorary Life Member of Aviston Knights of Columbus and a past member of the Aviston Elementary School Board. He graduated from Aviston High School in 1953 and soon after became a carpenter and retired after 25 years. Herman was known as “the collector”. He was the founder and owner of Huelsmann Distributing Co., Inc. He and his wife became snowbirds in 1991 and ever since that time they spent their winters in Florida. During his retirement he enjoyed building, maintaining, farming and sharing his beautiful DuBois country estate. Often times inviting friends or even complete strangers to come and enjoy their property and fish.

Memorials made in memory of Herman are suggested to St. Jude Children's Research Hospital, School Sisters of Notre Dame, or Caritas Family Solutions and will be received at church or at Nordike Funeral Home, 301 South Clinton Street, Aviston, IL 62216.

Online condolences may be made to the Huelsmann family by visiting www.nordikefuneralhome.com.