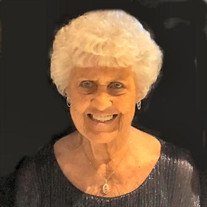 She was born on February 03, 1934, in Belleville, IL, the daughter of Albert and Velma (nee Schuetz) Brant.

She was a member of Saint Paul Catholic Church. She was also a member of Highland Knights of Columbus Council 1580 Auxiliary, Auxiliary to American Legion Lee Iten Post #439; Member of the Former St. Anne Altar Society; Many bowling leagues.

Mrs. Korte was born in Belleville, IL and grew up in Lebanon, IL. She graduated from Lebanon High School in 1952. After high school, she married George and traveled the world with his military career. They lived in Japan; Lancaster, CA; Biloxi, MS; Alamogordo, NM; San Angelo, TX, and Austin, TX. They moved to Highland in 1974, after living in 28 homes during his military career. She taught swimming and also bowling for 12 years. While stationed in Japan, she was on the base’s traveling bowling league. She was also the Past President of the Latin American Club. She was a Secretary and President for many bowling leagues and also was recognized in the Great Carlyle Bowling Association Hall of Fame. In addition to her love for bowling, she also enjoyed crocheting, oil painting, and playing cards and the St. Louis Cardinals and St. Louis Blues.

Funeral Mass will be at 1:00 PM on Friday, September 25, 2020, at Saint Paul Catholic Church in Highland, IL, with Father Pat G. Jakel officiating.

In leiu of flowers Memorial contributions may be made to St. Paul Capital Campaign Fund or Rellevant Pregnancy Options Center.