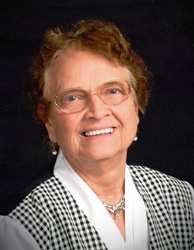 In addition to her parents and husband she was preceded in death by a grandson Kyle Norrenberns; a sister-in-law, Lorraine Schniers; and five brothers-in-law, Ralph Ethridge, Curt Duft, Cyril Schniers, Tom Norrenberns, and Tim Koch.

Mrs. Norrenberns was the owner/operator of the Diamond Lounge and Restaurant, an owner/installer of Norrenberns Swimming Pools and Spas, and owner of Jim & Mary’s Home Day Care. She was a member of St. Bernard Parish and ladies sodality, past member and officer of the Zonta Club of Belleville, past member and officer of the Stukenberg-Eilering Post 1026 ladies auxiliary, past member of the Albers Community Club, and past fund development chairman of the American Cancer Society.

A private Mass of Christian Burial will be held, and interment will take place at St. Bernard Cemetery in Albers.

Memorials may be made to the American Cancer Society or to the Alzheimer’s Association and will be received at Nordike Funeral Home. Condolences may be sent to the family at www.nordikefuneralhome.com.