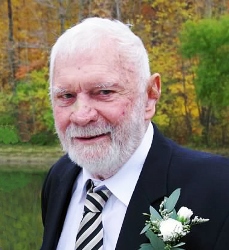 Nicholas G. Strubhart of Aviston died at St. Elizabeth’s Hospital on Friday, September 25th, 2020, at the age of 87 years.

Born in Aviston on April, 13 1933, he was a son of Nicholas and Margaret (Urban) Strubhart. On September 13th, 1960 he married Marita Orlet in Belleville.

Nicholas was a veteran of the US Navy, lifetime member of the American Legion Post 1239 / past commander, volunteered at the Aviston Country Side Manor for 30 years, served on Aviston school board, coached little league Khoury league, was a union carpenter local 470 for 50 plus years, a member of St. Francis parish, Citizens for Aviston and the Bib club.

He enjoyed the outdoors, hunting, fishing and gardening, actively followed his children and grandchildren in all sports and loved to spend time with his family.

Friends may call from 5:00 until 8:00 PM on Tuesday, September 29, 2020 at Nordike Funeral Home in Aviston. All in attendance are asked to please wear a face mask and refrain from handshakes and hugs.

Memorials may be made to American Cancer Society, Shriner’s hospitals, or Aviston American Legion Post 1239 and will be received at Nordike Funeral Home in Aviston.

Online condolence may be left to the Strubhart family by visiting www.nordikefuneralhome.com.