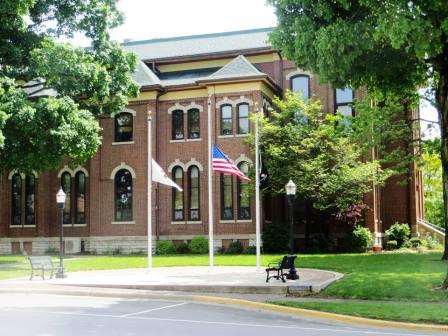 The Bond County Veterans Memorial was constructed in October of 1997. It was dedicated on Veterans Day, November 11th that year by the local AMVETS Post. Every year since, the post has organized a ceremony to include the changing of the flags flying at the memorial. The memorial was built to honor, respect and remember all Bond County residents who served in our nation’s military, no matter when, where or how long, living or deceased. The highlight of the memorial is the signature bricks baring the name, rank, branch of service, and any war the veteran may have served in.

Today there are close to 1,050 bricks in the memorial.

This has been an unusual year to say the least, with a worldwide pandemic infecting millions of people and taking millions of lives, not to mention the 100’s of thousands of Americans, and election year that has probably been one of the most controversial elections in modern history. But this is still America! And we are all still Americans! And we should remember those who served and those who died protecting America and preserving our freedoms.

This being said, the Veterans Day Ceremony, although downscaled due to the virus, will be conducted on Veterans Day, Wednesday, November 11th, at 11 AM. Some details are not complete and some things might change do to the weather, but there will be the changing of the flags, recognition of the new bricks added to the memorial, the gun salute, and Taps. The program will not be like the ones held at the First United Methodist Church in recent years, but it is hoped that we might have some students joining us, because the program at Greenville High School has been canceled.

Details will be shared as they are known.