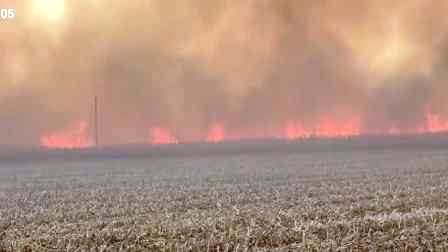 Saturday’s big fire that stretched from just outside of Donnellson, north to near Hillsboro, will be remembered by all of the nearly 300 firefighters who responded from 40 fire departments.

The fire burned about 10,000 acres, mostly farm fields, stretching eight miles in one direction and four miles east to west.

It is believed the fire was started due to sparks caused by a train travelling northeast of Donnellson.

One home burned in the fire, but the occupants were able to escape. Two firefighters had minor injuries.

David Caulk, assistant chief with the Shoal Creek Fire Protection District, was incident commander. He said he quickly realized the dry conditions, coupled with the strong wind, were going to make extinguishing the fire very difficult.

Caulk said he called the 911 dispatcher in Montgomery County to request extra assistance from other departments. He praised the efforts of the dispatchers in both Montgomery and Bond County for their efforts.

Caulk said the quickly spreading fire gave him an appreciation for what firefighters out west, battling wildfires, are going through.

He said he’s been a firefighter for almost 40 years and has been incident commander for several situations, but none like what he experienced Saturday. He said there are many emotions involved, including feeling overwhelmed. He noted he was also overwhelmed by the outpouring of support from the community.

Area farmers and companies travelled to the fire with equipment to make fire barriers and provide additional water to fight the flames. Caulk was astounded at the help everyone provided.

He said he can’t thank them enough for the use of their various pieces of equipment.