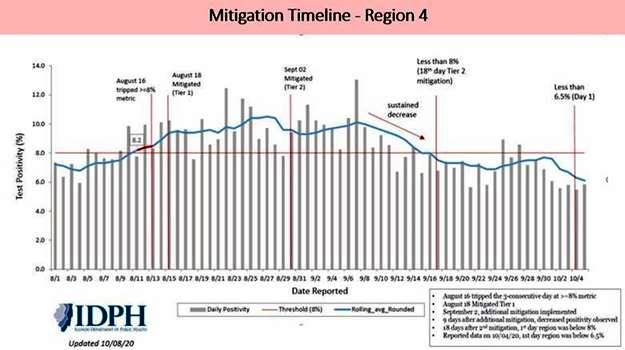 Governor Pritzker and the Illinois Department of Public Health (IDPH) are announcing that Region 4, the Metro East, will return to Phase 4 of the Restore Illinois Plan today, October 9, 2020 at 5 p.m. While the rate of testing in Region 4 has remained relatively stable, the rolling average positivity rate in the region has fallen from a high of 10.5 percent on August 27, 2020 to a rate of 5.8 percent today. The roll back is a result of close coordination between IDPH, local health departments, and community leaders encouraging proven and targeted mitigation efforts.

“After surpassing an 8 percent positivity average in August – later reaching a peak 7-day average of over 10 percent– Metro East leveled off between an average of 7 and 8 percent positivity for several weeks, and as of this morning, has secured the progress necessary to end the increased mitigations in Region 4,” said Governor JB Pritzker. “All of this takes place in a landscape where Illinois is continuously increasing our ability to test for and monitor this virus: we are now pushing an average of nearly 60,000 tests a day – and we surpassed 6 million tests to date. There is testing available to you if you need it. If you were potentially in contact with a COVID-19 case, if you’re feeling unwell, or if you just want to check in, you are able to get a test at no cost.”

“We are excited to see that after weeks of mitigation measures and sacrifice, Region 4 has reduced its positivity rate and can return to Phase 4,” said IDPH Director Dr. Ngozi Ezike. “It takes communities working together to reduce the spread of the virus and lower the positivity rate. I want to thank Region 4 for its hard work to decrease the risk for all of Illinois.”

As of today, Region 4 has reached the threshold to lift mitigations following three consecutive days of a rolling positivity rate below 6.5%. Therefore, indoor dining and bar service can resume along with larger gathering sizes as outlined in Phase 4 of the Restore Illinois plan. IDPH will continue working closely with the region to prevent another spike in cases.

The administration also continues to strengthen its nation-leading testing operation. In early May, the State of Illinois opened a community-based testing site at the Jackie Joyner-Kersee Center in East St. Louis to make testing more readily available for anyone. On Wednesday, the state surpassed 6 million tests, less than three weeks after Illinois was one of the first states to cross the 5 million test benchmark. Testing remains a critical step in reducing the spread of the virus, given that a positive test result begins the contact tracing process and can prevent further spread in communities.

In addition to testing, IDPH continues to monitor each region in the state for several key indicators to identify early increases of COVID-19 transmission in Illinois, potentially signifying resurgence. Additional measures will be implemented if a region experiences an increase in COVID-19 test positivity with a simultaneous decrease in hospital capacity or increase in hospital admissions for COVID-like-illness, or if the 7-day rolling positivity rate is above 8% for three consecutive days.

Region 1, home to Rockford, Dixon and Galena, is currently operating under additional mitigations as the region continues to report a 7-day rolling positivity rate above 8%.

A full list of mitigation measures pertaining to certain businesses and industries may be found on the Illinois Department of Commerce and Economic Opportunity (DCEO) website at www.dceocovid19resources.com/restore-illinois. 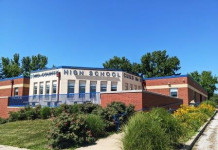 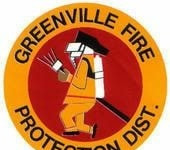