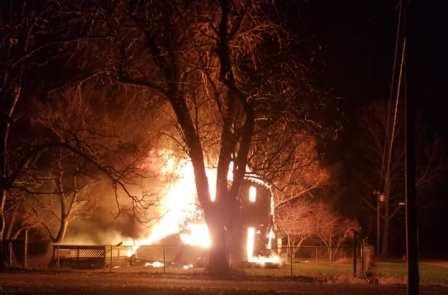 A two-story home was destroyed by fire over the weekend in Donnellson.

Fire Chief Kent Priddle told WGEL when firemen left the Sorento firehouse, they could see the glow of the fire. Priddle reported by the time firemen reached the house at 500 East North Street in Donnellson, the home was engulfed in flames.

No one was home when the fire broke out.

Assisting Shoal Creek firemen was the Taylor Springs Department. The Greenville District was also called, but cancelled before trucks reached the scene.

Chief Priddle said the house completely burned. He indicated the state fire marshal has been contacted in hopes of being able to determine what caused the fire.

Shoal Creek firefighters received another call about 11 p.m. Sunday, that the fire had rekindled. They checked the situation, but no fire trucks returned to the scene.