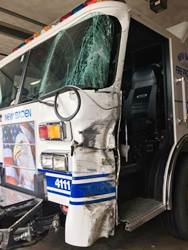 A New Baden fire truck was involved in a crash Wednesday morning while firefighters were responding to an accident on Interstate 64 near Mascoutah.

There were three firemen in the vehicle. Illinois State Police report no one was injured.

The crash involving the fire truck occurred just before 9 a.m.

State police indicated the fire truck was westbound in the left lane, preparing to turn into the crossover lane in the interstate median since the original accident was in the eastbound lanes of I-64.

The driver of the fire truck completed the turn into the crossover, as the other truck travelled into the median and hit the front driver’s fender and door area of the fire unit.

The semi crossed both eastbound lanes and came to rest on the interstate shoulder. State police indicated no citations were issued.