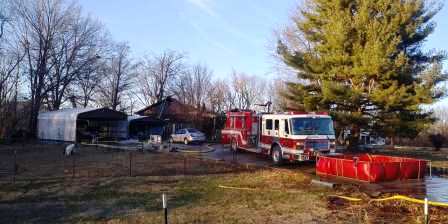 A House fire in Greenville Saturday afternoon sent three local firefighters to the hospital where they were treated and released for minor injuries. The fire was at 1445 Mt Zion Road around 12:30 Saturday afternoon. Two firefighters were trapped when the roof collapsed on top of them. According to Greenville Fire Protection District Chief Denny Wise the fast action by their fellow firefighters got the two trapped men freed after a few seconds. Both were taken to the emergency room by ambulance and released after treatment. A third firefighter also sustained minor injuries to his hand from broken glass from a window. All three firefighters are expected to fully recover. 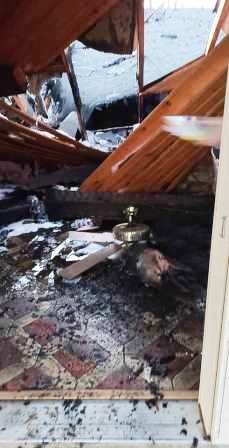 Chief Wise said while the two were trapped for only seconds it seemed much longer and all were very thankful injuries were not worse.

The fire likely spread from the chimney to the attic. The home was occupied and a complete loss. Mulberry Grove Fire, Smithboro Fire, Shoal Creek Fire responded, BC EMS and Pocahontas – Old Ripley EMS all responded to the scene.