New Greenville Mayor George Barber was sworn into office Tuesday night, and his first action was to honor his predecessor Alan Gaffner.

Gaffner was first elected to the Greenville City Council in 1989, was appointed interim mayor in June of 2002, and served as mayor for 19 years.

At Tuesday’s meeting, the city council and mayor approved a proclamation to rename the Greenville Business Park for Gaffner. 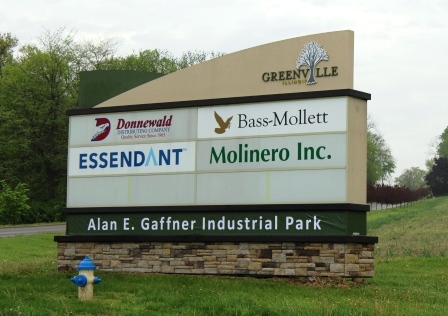 Click below to hear Mayor Barber read from the proclamation:

Emotionally touched by the recognition, a very sincere Alan Gaffner spoke to the large audience of family members and friends to express his gratitude for the honor.

He thanked Mayor Barber and the council and said he would continue to work as a volunteer to continue to attract businesses, industries, and jobs to Greenville. He said, “It’s not about me, it’s about we.” Gaffner said he was overwhelmed and returned thank and credit to The Lord, hoping God would continue to bless Greenville and the industrial park.

Gaffner was presented a framed proclamation and the key to the city.

The business park was opened in 1988 and was named for Howard Wolf, who was associated with United Stationers, the first tenant of the park. Mr. Wolf died in 1989.

Temporary signage has already been put into place.

Mayor Barber said when the permanent signage for the Alan E. Gaffner Industrial Park arrives, a special celebration will be held, probably sometime in May.