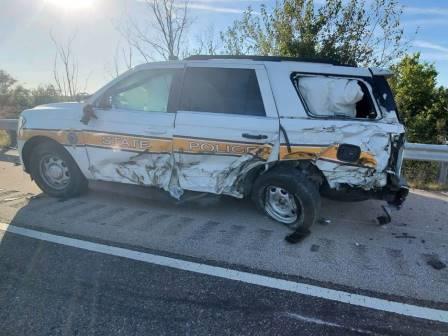 An Accident on I-70 at eastbound mile marker 76 Sunday sent an ISP Trooper to the Hospital.

At 6:03 AM, an Illinois State Police District 12 trooper was stationary on the right hand side of the interstate at mile marker 76, near St. Elmo, in a marked squad car with emergency lights on, assisting a stopped motorist. A semi-tractor trailer truck heading east allegedly failed to yield for the emergency vehicle, veered off the roadway to the right, and struck the rear driver’s side of the squad car.

The trooper and the driver of the semi were both transported to an area hospital with non-life threatening injuries.

The driver of the semi, 58 year old Pedro Espinoza of Sunland California, was charged with alleged violation of Scott’s Law, failure to reduce speed to avoid an accident, and improper lane usage.