Two suicide bombers and gunmen attacked an airport in Kabul in August, killing 60 Afghans and 13 US troops.

Becky Stoecklin, owner of Studio 36 in Pocahontas, said she was heartbroken to hear the news and said with all of the other issues facing the US, everyone should come together to honor the brave service men and women who were killed in the attack.

She told WGEL she thought through some ways to do that and decided to work with Johnson Signs & Designs in Greenville to create a sign with the names and faces of the fallen 13 and display it the outside of Studio 36 Salon & Spa on Johnson Street in Pocahontas. 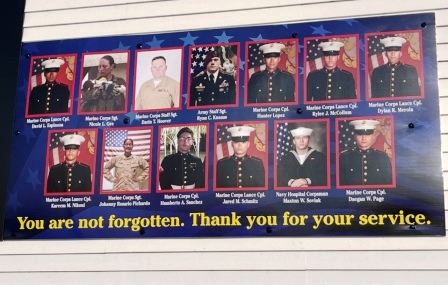 She thanked Johnson Signs & Designs for putting in extra work to have the display up prior to the anniversary of 9/11.

Stoecklin said many people have stopped to view and take pictures of the display and she invites others to do the same.